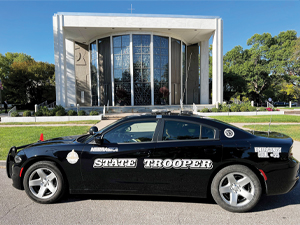 LINCOLN (SNR) – Law enforcement, fire and rescue services and corrections personnel were thanked and honored as part of the annual Blue Mass at the Cathedral of the Risen Christ in Lincoln on September 11.

Nebraska’s first responders who died last year are fondly remembered, as are the victims of the September 11, 2001, terrorist attacks.

Bishop James Conley presided over the mass. He prayed for all first responders and in his homily he said all should have their hearts filled with gratitude for the sacrifices made by the men and women who answered God’s call to serve and protect.

“I believe it is a call, a vocation, to serve us, to protect us and to watch over us,” Bishop Conley said.

He shared his own experience of the 9/11 terrorist attacks, noting that he was working in Rome at the time and immediately turned on the television to watch the reports when he learned what was happening in the United States.

“It was surreal. It was a movie. It sure isn’t happening,” he said. “It was true. The unthinkable was true. He went on to say that the country was forever changed and Americans “lost our innocence” that day.

Bishop Conley said that as people reflect on this day, we need to understand that the history of mankind is tied to sin and we all suffer from this weakness, this mistaken view of the world. But, he added, “our God is a God of love, compassion, mercy and justice. He watches over us. He cares about us. He provides for us, and He has promised us that if we follow His way and His law, He will reward us in this life and forever in heaven. That’s what we believe as Catholics, as Christians.

Regarding those who are called to protect us as first responders, Bishop Conley said, “We know there is a lot of evil in the world…but God sends us people to protect us and watch over us and to guide us and they are with us and we are with them. You’re not alone. We support you. We depend on you. We care for you and we honor you because we need you.

Bishop Conley pointed out that the Church also holds special Masses to honor healthcare workers and all those working to uphold the law, including judges and politicians. He said that all of these people are given to us by God “so that we may live a life of mutual respect and dignity, and that our society may be ordered to good.”

Several members of the honored first responder groups were in attendance and read the names of law enforcement personnel who have lost their lives over the past year. Members of the Knights of Columbus also participated in the mass.

The Catholic Church is increasingly diverse – and so are its controversies