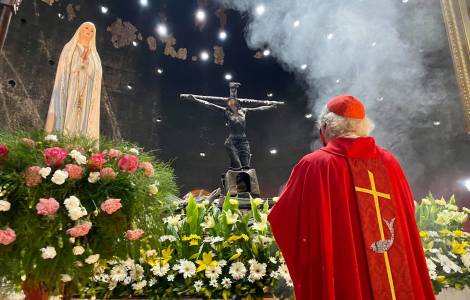 Managua (Agenzia Fides) – â€œToday, on the feast of our patron saint, we must take the opportunity to ask ourselves what prompts us to seek the Lordâ€, declared the Archbishop of Managua, Cardinal Leopoldo Brenes. , during Sunday mass, August 1, because of the pandemic was broadcast from his home.
The cardinal was referring to the celebration of the feast of Santo Domingo by Guzman, which was organized in the streets of the capital at the initiative of the mayor of Managua without prior consultation with representatives of the Catholic Church.
The archdiocese of Managua, led by Cardinal Brenes, had suspended celebrations to avoid “excessive gatherings of believers” during the pandemic. Cardinal Brenes therefore called on people to â€œmeetâ€ the patron saint in the privacy of their own four walls instead of â€œseeking happiness or noiseâ€.
However, the mayor of Managua has announced that the celebrations will take place without the blessing of the Catholic Church and with a copy of Guzman’s icon of Santo Domingo. And this in a tense political climate three months before the legislative elections, during which President Daniel Ortega wants to be reelected.
â€œThe Lord knows our intentions because we follow the Lord, because we follow our icons, our patron saints, and the Lord turns to you: Today you seek me because you have received my bread, because I have nourished you, and that is why you are looking for me, â€continued Cardinal Brenes as a reflection of the Sunday Gospel.
Meanwhile, the Archbishop of Managua had invited to a pilgrimage last Saturday, attended by more than 20,000 people in the cathedral of Managua in compliance with corona rules with masks and respecting the prescribed distance in front of the historic icon of the Blood of Christ. The cathedral was badly damaged in a fire in 2020, which Pope Francis called an “attack”, while Nicaraguan police spoke of an “accident”.
Although Saint Domingo de GuzmÃ¡n is not the true patron saint of Managua, but the holy apostle James, his icon is revered throughout Nicaragua in the manner of a patron saint. In his honor, there are festivals in Managua every year from August 1 to 10. However, this is not the first time that civil authorities have organized religious activities without consulting the Catholic Church (see Fides, 9/22/2018 and 7/16/2020).
Tensions between the government and the Catholic Church escalated after President Ortega’s attacks on bishops and priests. Meanwhile, the Bishop of Matagalpa and Apostolic Administrator of the Diocese of Esteli, JosÃ© Alvarez, declares on social media: â€œFear does not come from God. We live in the freedom of the children of God, so we will also do our pastoral work and our evangelization, the mission continues without fear “. (CE) (Agenzia Fides, 03/08/2021)

WORDS TO LIVE: Jesus gave himself so that we could live | Way of life