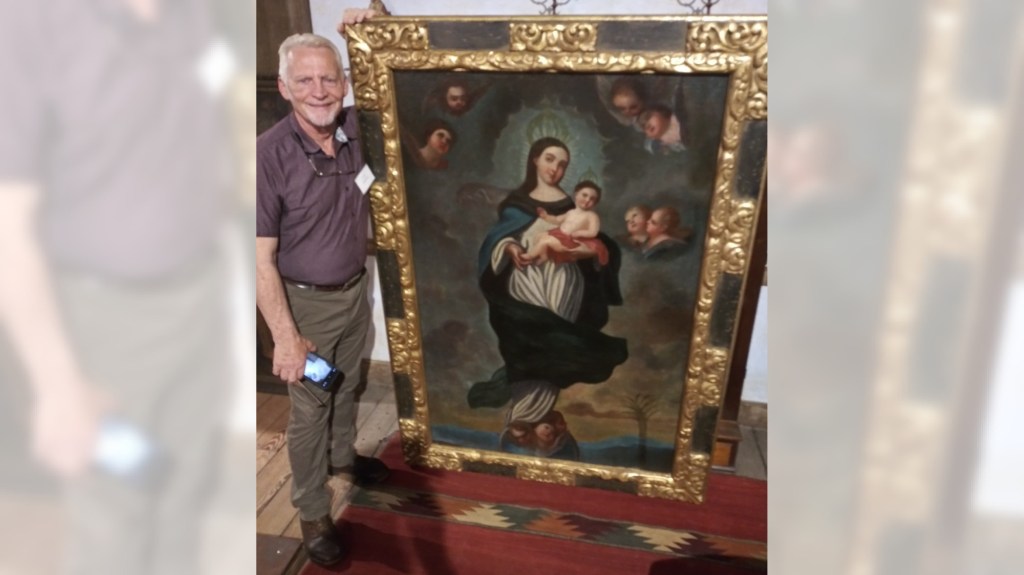 After two centuries, the painting of the Vejar Chapel has regained its new appearance – San Bernardino Sun

The maid “SeÃ±ora” looks bright, clean, and, frankly, much happier than she has been in a century, or maybe two.

She is the â€œNuestra SeÃ±ora de Los Angelesâ€ – Our Lady of the Angels – a painting that has withstood the rigors of travel and at least one fire since it was completed in Spain, probably around the time of the Revolution. American.

It spent nearly 200 years in Southern California, but never looked better when its restoration was unveiled on July 10 by the Pomona Valley Historical Society. It was striking to see how her face, tarnished for decades by the effect of smoke, dust and smog, was simply angelic.

Resident host Mike Schowalter said “SeÃ±ora” had been at Palomares Adobe in Pomona since 1940, long after her initial trip from Spain to Mexico and then to one of the Southern California missions, although this one is still unknown. After secularization or the closure of the missions by Mexico around 1835, many of their religious utensils were sold or donated to local Catholics.

It was then that Ricardo Vejar – who with Ygnacio Palomares had jointly hosted Rancho San Jose, in eastern Los Angeles County – acquired â€œSeÃ±oraâ€. At his ranch in the Walnut area, Vejar built a chapel – the first such church in the area – and installed works of art, some apparently from closed missions.

Where “SeÃ±ora” – and another Historical Society painting believed to be that of John the Baptist – stood before reaching the Vejar Chapel remains a mystery, but Schowalter said the society continues to search for answers.

After Vejar’s death, the paintings went to his son Ramon, whose house in La Verne was later destroyed by fire. News of the fire on January 23, 1918 initially indicated that all artistry had been lost, but later it was revealed that the paintings had survived.

Ramon Vejar’s daughter Estella donated the paintings to the company in 1940 for the opening of Palomares Adobe in Pomona.

When conservator Scott M. Haskins, of the Santa Barbara Fine Arts Conservation Laboratories, began work on “SeÃ±ora” last year, he knew immediately that she had barely survived a fire.

â€œWe found small blisters all over the paint due to the fire which took special care to restore,â€ said Haskins, who has restored many paintings in Europe and the United States. 17th century – much earlier than originally thought – and believed to have been painted in Seville.

The restoration was funded by numerous individual contributions and a large grant from the Native Sons of the Golden West.

Plans are also underway to restore the painting of John the Baptist, which is believed to have been painted years after â€œSeÃ±oraâ€ and probably in Mexico.

Contributions to this restoration can be made to the Pomona Valley Historical Society at 585 E. Holt Ave., Pomona 91787.

It was the start of the Roaring Twenties, and Riverside teens refused to reverse a 1921 city ban on underage girls from attending public dances, the Sun newspaper reported on January 2.

Instead, the young people were forced to travel to San Bernardino for their â€œTerpsichorian entertainmentâ€. Shocking.

Frustrated, a group of girls from Riverside wrote to the local newspaper that on their way to their neighboring town they “would fall lower and lower until they were not respected by anyone or had no respect.” for themselves, â€a slam that didn’t make San Bernardino feel very good about himself either, the Sun noted on Jan. 13.

But never underestimate the ingenuity of teenage girls. They found a way to dance around the city rules by hosting ‘dancers’, usually a more formal high society afternoon tea dance. From 3 p.m. to 5 p.m., these balls were held with chaperones “and under this disguise expect to keep the police in the dark about the nature of the events”.

â€¢ The California Historic Route 66 Association will host a virtual conference on Saturday July 24 by Scott McCoy, historian and creator of the Route 66 guide for the traveling public.

The 9-hour lecture via Zoom will explain how to plan an adventure on Route 66 and explain why the route captivates travelers from all over the world so much. The Zoom ID is 961 194 5998 with an access code of 979035.

â€¢ The Pomona Valley Historical Society has resumed its 30-minute tours of its historic sites. Tours run between 2 p.m. and 4:30 p.m. and cost $ 5.

Reservations can be made at pomonahistorical.org/events.

Joe Blackstock writes on the history of the Inland Empire. He can be contacted at [email protected] or Twitter @JoeBlackstock. Check out some of our columns from the past on Inland Empire Stories on Facebook at www.facebook.com/IEHistory.