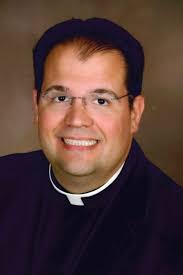 By David Fleet
Editor
Brandon Twp.-On September 1, Bro. Craig Marion, 43, was appointed the new pastor at St. Anne’s, 825 S. Ortonville Road. He replaces Fr. Gerry Frawley who retired after 13 years.
Originally from Madison Heights and graduated from Lamphere High School in 1996, Marion studied business at Oakland Community College and Walsh College, where he earned a degree in finance. For about 13 years after college, Marion worked at several companies, including General Motors for seven years, human resources, a systems analyst, and fast food restaurant.
Marion, continued to attend his native parish, St. Vincent Ferre in Madison Heights, where he was a reader and extraordinary minister of the Eucharist. Marion was invited to do a ministry called â€œNobody Dies Aloneâ€ at Troy-Beaumont Hospital. The program provides compassionate companionship to dying patients who do not have friends or family available at their bedside.
â€œAbout the fourth or fifth time I was there, they asked me if I would pray with someone who is not a Catholic,â€ Marion said. “Of course, what do I know? I am an accountant.”
The woman he was to pray with was a 97-year-old Jewish Holocaust survivor from the Auschwitz concentration camp.
â€œI didn’t know how to pray other than as a Catholic would,â€ he said. â€œShe looked at me and said, ‘You should be a priest.’ “
At first, the call to the priesthood was a refusal, Marion recalled.
â€œLike Isiah, it was a denial,â€ he said. â€œThere was no way I was called that. I didn’t have the education, I didn’t go to parish schools, I didn’t know enough about the faith. Finally, my pastor reminded me that many apostles were illiterate and told Jesus that they had received the Holy Spirit. That’s how I discovered it and two years later, I was at the SÃ©minaire du SacrÃ©-CÅ“ur in 2010. â€
Marion resigned from her job, spent three years studying philosophy and living at the Grand SÃ©minaire du CollÃ¨ge du SacrÃ©-Coeur and in 2013 obtained a bachelor’s degree in philosophy. Like all men who are now studying to become a priest for the Archdiocese of Detroit, he began studying theology at Creighton University, within the Institute of Priestly Formation, specifically the spirituality of a diocesan priest. .

â€œI was in Creighton praying the Rosary when Our Lady said, ‘Yes, you are called,’â€ recalls Marion. â€œIn my heart, that’s how I felt and it gave me the confidence to keep going. None of us are worthy of the call, we all doubt.
He then returned to the Sacred Heart and began theology in the fall of 2013, as a candidate for Holy Orders and finished with a master’s degree in divinity from the Major Seminary of the Sacred Heart. At the same time, he obtained a bachelor’s degree in sacred theology awarded by the Angelicum in Rome. He was ordained on June 3, 2017.
Marion was temporary administrator of the Sacred Heart in Auburn Hills. Immediately before that, he served at St. Andrew’s Catholic Church in Rochester, Michigan. Before that, I was associate pastor at St. Paul on the Lake Parish, Grosse Pointe Farms first for Msgr. Pat Halfpenny, and the last year for Bro. Jim Bilot.

Religious services for Gwynedd and Conwy for Sunday October 10

Our views: the old girls’ school relishes tradition and learns from its history | Our opinions