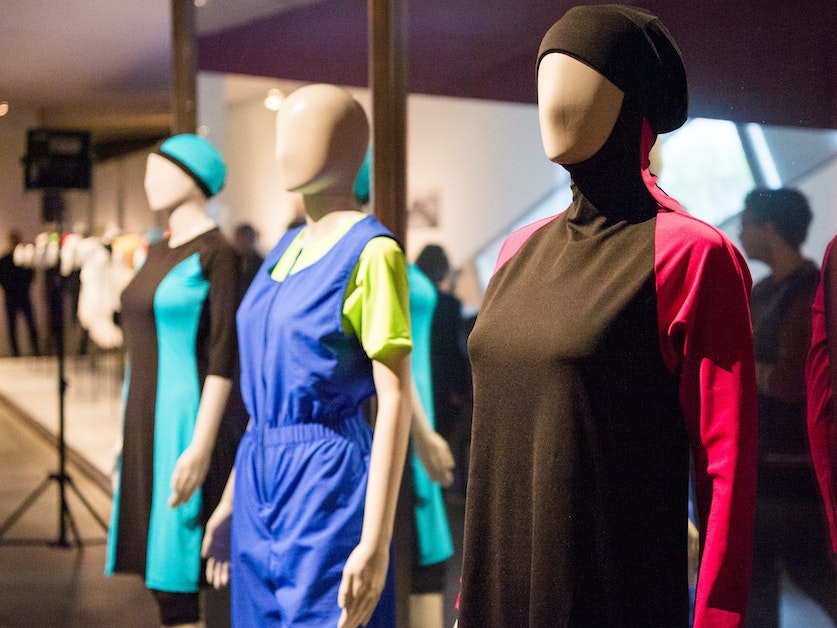 GRENOBLE, France — The mayor of Grenoble, Éric Piolle, was the first environmentalist to lead a major French city, and this year his Alpine town was named European Green Capital. By the end of the year, Grenoble will cover all its electricity needs with renewable energies.

But nobody talks about it, he says. On the contrary, Piolle is attacked for having authorized the burkini in the public swimming pools of his city.

“It touched very intense emotions in people,” he said in an interview in his office.

Piolle grew up a Roman Catholic and he says 30 years ago there were more signs of Catholicism in public. He says the most visible religion today in France is Islam, which makes some people nervous.

“I understand that they struggle with religious expression in the public space,” he says.

But the mayor says people are confusing things. While France bans outward religious symbols in public schools or government offices to ensure neutrality, people are allowed to wear whatever they want in public.

In mid-May, the city council authorized the wearing of body-covering swimsuits, commonly known as burkini, in public municipal swimming pools in Grenoble. Piolle said there was simply no reason to ban them.

The backlash was immediate. In a TV interview, far-right leader Marine Le Pen called the full-body swimsuit a threat to French secularism and beyond.

“It’s a sign of separatism and women’s submission,” Le Pen said. “The opposite of our values ​​and our constitution. This is how Islamic fundamentalists gain the upper hand. Victories over food or clothing may seem trivial, but are very serious.”

It’s not just the far right. President Emmanuel Macron’s interior minister, a hardliner, called Grenoble’s stoppage a provocation and immediately filed an injunction to block it in court. The mayor appealed.

Opposite the Grenoble train station is the office of the Alliance Citoyenne, an association for the defense of citizens’ rights which campaigns for covering swimsuits to be accepted in public swimming pools. Elies Ben Azib leads the organization, which also fights for the protection of the rights of disabled and deprived people, and has only recently taken up the fight for Muslim women who want to wear swimsuits that protect their modesty.

Ben Azib, who happens to be Muslim, says the group has never had any problems with their other work. But there was political harassment when it came to Muslim women. He says Muslims are always suspected of having a hidden agenda.

Alongside the burkini, the group is also pushing to allow boxers in France’s notoriously restrictive public swimming pools, and for what’s known as the “monokini”, i.e. topless.

Two of the community organizers are also in the office. The women, Yasmina and Anissa, both in their early thirties, do not want to give their surnames as they have received threats online. Anissa says the work just started four years ago.

The women say that it is very hot in Grenoble in the summer because the surrounding mountains trap the heat. And people depend on public swimming pools to cool off. They started their campaign with very positive letters and meetings with local officials. But then nothing happened. So they threw a few pool parties.

In the videos from these parties, people wear burkinis and bikinis, and are joined by many non-Muslims. Activists chant slogans and splash around in a public swimming pool.

They say it was a positive experience because other swimmers were interested in what they were doing and they were able to talk to them about the problem. But other so-called pool parties were less successful. They were once stopped from entering a swimming pool by police officers who made them “feel like delinquents”, says Anissa.

Another time, the pool attendants called security, who ushered all the other swimmers out of the pool.

“It was very violent for us because we felt like we were dirty or something because they wouldn’t let other swimmers swim with us,” says Anissa.

These women, who both wear the hijab, say the burkini has nothing to do with Islamist extremism. The mayor accepts. Extremists would never allow their wives to go swimming, the women explain.

But after two major terrorist attacks in France in 2015 and the beheading of a schoolteacher in 2020 – all by self-proclaimed Islamist extremists – many French people are drawing a link between religious dress and possible fundamentalism.

The 1905 French law on secularism guarantees the separation of religion and state and the free exercise of all religions. It does not discourage religious expression. Piolle says that since the terrorist attacks, people have been bending the law to try to ban religious expression in public.

For Anissa and Yasmina of Alliance Citoyenne, being able to wear a burkini means having the same rights as everyone else. “That’s all we want. No more rights, like everyone else,” says Anissa. “We don’t want to be second-class citizens. If we pay taxes, we have to have access to them, like everyone else.”

Activists say they don’t want to Islamize public swimming pools, as some have charged, or push the issue further. Both women went to public schools where the hijab is not allowed. “We support secularism and have no problem with that,” says Anissa.

Yasmina says people often confuse everything when they talk about the veil: “They think our husbands or our fathers make us wear it, which is totally wrong.”

People compare them to women in Afghanistan or Iran. Yasmina says France acts hypocritically, behaving like the dictatorships she criticizes.

“Not letting women wear what they want is as oppressive as forcing women to wear the veil,” she says. “They are two sides of the same coin: oppressors who want to impose dress restrictions on women.”

Piolle, the mayor, agrees. “It’s crazy when you start regulating people’s clothes in so much detail,” he says.

It should be noted that no one seems to hesitate to allow topless bathers in the pools.

Piolle said he was struck by the absurdity of it all. “We have a climate emergency and a war in Ukraine and the country is focused on five or 10 women who want to wear a different swimsuit in the pool,” he says.

The women of the Citizens’ Alliance say they obtained 2,600 signatures on their petition to authorize the burkini while it only took 50 to obtain a meeting with city officials. Yasmina says they are proud and feel powerful, even though their measure is currently blocked.

“We put this issue on the agenda of the city council and we are supported by the mayor,” says Yasmina. “We are now taken seriously by feminist organizations who did not consider our struggle as feminist at the start. These are victories for us and for Grenoble.”

There is a large poster in the group’s offices with a history of civil disobedience around the world. Ben Azib says the group was greatly inspired by the American civil rights movement of the 1960s – lunch counter sit-ins and other nonviolent acts of civil disobedience by individuals like Rosa Parks, who refused to give up his bus seat to a white man.

“It’s interesting how one woman – Rosa Parks – can change everything. You know the narrative around black women, the narrative about segregation, etc. It was very inspiring for us,” he says.

Ben Azib says they watched videos and studied speeches. “We want to change the way Muslim women are perceived in France,” he says.

The decision of the court on the authorization or not of the burkini in the swimming pools of Grenoble is expected from one day to another. Ben Azib says if they don’t win, they will appeal to the European Court of Human Rights.

“We have to keep going,” he said, “because we’ve spent too much time and energy, and also we have so many people who are counting on us to keep the fight going.” [Copyright 2022 NPR]

Perry: Rep. Lauren Boebert is everything she says she is – ignoring that is dangerous