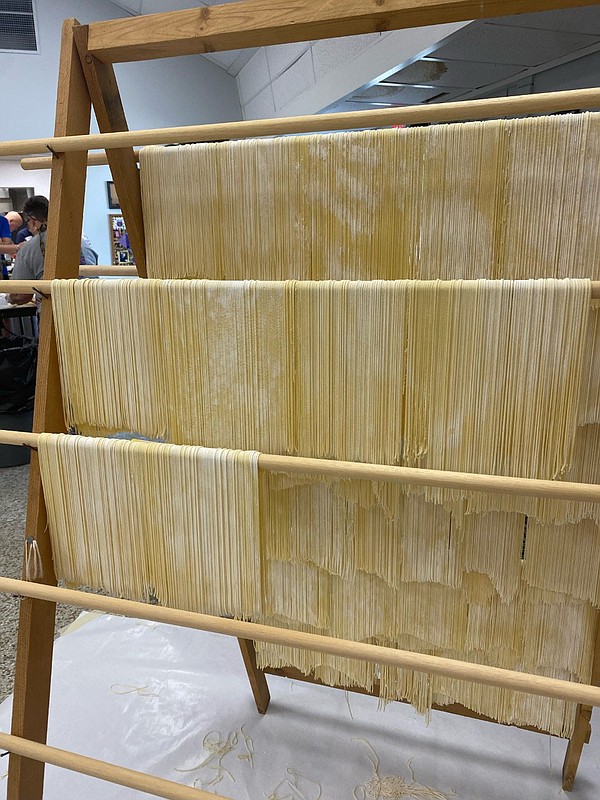 “A family reunion for the city:” The Grape Festival returns to Tontitown

Henry Piazza remembers the Tontitown Grape Festival when it featured 25-cent outdoor movies and glass bottles of Coca-Cola, long before there were concerts and carnival rides.

Piazza, 86, lives across from the house he was born in in 1936. He has lived in Tontitown all his life, and he and his wife Charlotte founded the town’s history museum.

For Piazza and many others with Tontitown roots, the coming week of August is a reminder of a rich history that spans generations.

Event chairman Ryan Pianalto explains that the grape festival began in 1898 as a “picnic,” a celebration of a bountiful harvest of grapes by Italian immigrants who settled in Tontitown. Families gathered to celebrate Holy Mass in thanksgiving, to share a meal and to celebrate. This very first picnic would become Tontitown’s greatest tradition today.

Misty Piazza, Henry’s daughter-in-law, says the week feels like a family reunion for the town.

“A lot of the founding families come back even though they don’t live in northwest Arkansas anymore,” she explains. “It’s kind of like a family reunion in many ways. A lot of past generations will come back, and you’ll see whole families come to visit or eat dinners.”

Heather Ranalli-Peachee is the fourth generation of Ranallis in Tontitown. Her father, Chris Ranalli, is the last commercial winemaker in town and grows all the grapes for the festival, she says.

Ranalli-Peachee says the grape festival has always been an important part of her family’s life. She thinks the rich history of the event is what makes it unique.

“The Washington County Fair and the Benton County Fair are really great, but the tradition and history we have at the festival makes it even more special,” says Ranalli-Peachee.

One of his favorite traditions is the Homemade Spaghetti Dinner at St. Joseph’s Catholic Church Parish Hall.

“It’s a Tontitown-specific meal,” says Ranalli-Peachee. “It’s not spaghetti and meatballs, it’s spaghetti and fried chicken because the Italians moved next door to Springdale and they had a lot of chicken. I think that’s what makes it unique.”

The process of making spaghetti is a beloved tradition for many families in the city. Misty Piazza went with her kids and hubby Dean Piazza to make spaghetti from scratch last week. The process takes four separate days and a huge community effort. This year, the community made 3,500 pounds of pasta for the festival.

Dean Piazza, Henry’s son, says the festival reminds him of the importance of remembering the hardships his ancestors faced.

“When they came to northwest Arkansas and established Tontitown, they had nothing,” Piazza says. “They had log cabins and they made barns out of field stones. They were very resourceful and used the earth.”

While Piazza shares the traditions of the festival with his children, he also tries to convey a sense of gratitude for his family’s history.

Piazza remembers learning how long before there was spaghetti and fried chicken, early settlers had polenta, garden tomatoes and roasted rabbits that they slaughtered in the woods. He says he enjoys comparing and contrasting today’s festival to the experiences of early Italian immigrants.

“The trick is to keep the story alive and not let it die,” Piazza says. “The memory of the people who came rests with my generation and my children. To continue, we’re going to have to keep telling these stories.”

Misty Piazza takes a break from the process of making homemade pasta for the Tontitown Grape Festival. The process takes four separate days and a huge community effort. This year, the community made 3,500 pounds of pasta for the festival. (Courtesy picture)

Bloomington judge, Indiana University law professor and Catholic deacon dies in crash on I-465 near I-70